Are you a young, environmentally conscious, young financer? Want to make your career decisions based on your contributions (or rather, your lack of contribution) to *checks notes* the fossil fuel life cycle? Welcome to the banking climate change hall of shame, where you can choose for yourself which of the banks you’re considering is the greenest.

The Rainforest Action Network (RAN), a San Francisco-based charity that “protects the climate and upholds human rights by challenging corporate power and systemic injustice through frontline partnerships and strategic campaigns,” has published a comprehensive list of the top banks that facilitate the “fossil fuel life cycle”.

Financing for the fossil fuel life cycle, in billions, by major banks 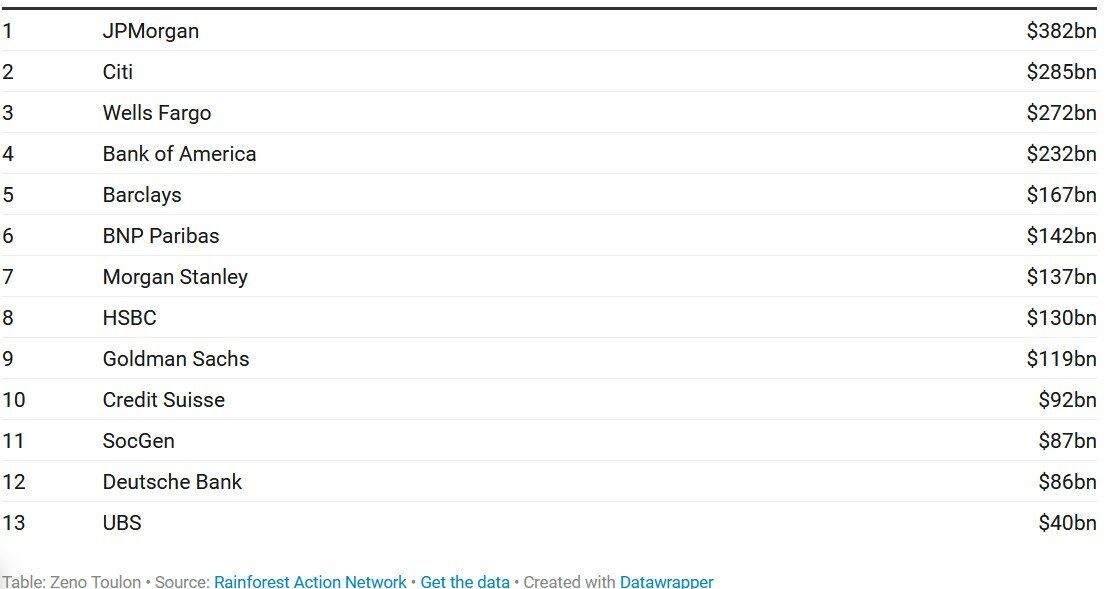 It suggests that JPMorgan is by some margin the most egregious contributor to climate change. The RAN notes that the bank has topped the list for every year since the Paris Agreement in 2015. We’ve omitted some of the banks on the list (there were sixty in total) but it’s worth pointing out that the first four banks are American – and that an EU-based bank doesn’t show up until tenth position on the overall list. UBS in particular has some pretty intense commitments in the ESG space and has said it won’t fund coal-fired power plants or drilling in the Arctic.

JPMorgan, Citi, Wells Fargo, and BofA all have climate change commitments based on the goals and framework of the Paris Agreement – but RAN says that this isn’t sufficient to make a difference, and that “bankers need to face this reality when making financing decisions – including explicitly requiring real Paris Agreement alignment as a precondition for financing, and walking away from clients that are not aligned.”

Financing for the fossil fuel life cycle, in billions, by major banks

Looking chronologically at the banks reveals some other trends worth mentioning (the graph is interactive by the way – feel free to hover over parts of it to see breakdowns). Some banks, such as Credit Suisse, Deutsche Bank, and UBS have clearly slowed down fossil fuel-related financing. Others have stayed flat, or even grown (looking at you, JPMorgan).